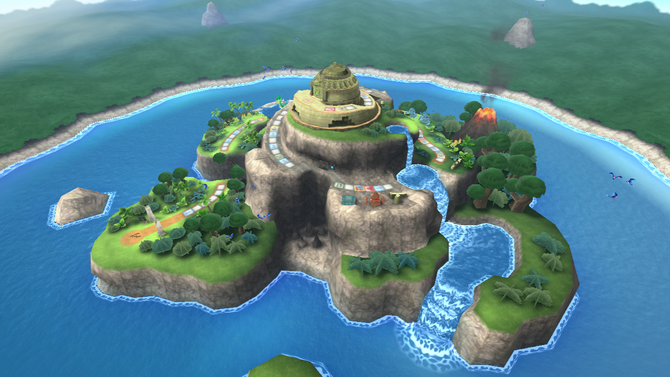 Board Game Island is one of the options in Wii Party that can be played in the Party Games.

The gameplay is mainly similar to a traditional board game. In each round, the players all play a 4-player minigame which determines the order in which they will go (If there is a tie, a die roll decides the order.) The players who place 1st, 2nd and 3rd get a bonus die. The player who places 1st gets a gold die which consists of all the numbers from 1-6, 2nd place gets a sliver die which consists of the numbers one to three, 3rd place receives a bronze die which consists of the numbers one and two, and last place gets only the standard die. Once a player rolls the die, they will move the exact number of spaces. The board game contains of 73 spaces. If the player gets doubles (Meaning the dice and bonus dice are the same number, such as two 6s), the player gets to roll another die. The highest number that can be rolled is 18. (6 from regular die, 6 from the 1st place bonus die & 6 from die if you get doubles). If you manage to get to the top, there will be a dragon structure and in order to beat it, you have to roll at least a six to win the game.

In Board Game Island, there are tons of spaces the players can land on. (NOTE: These are not the official names for these spaces.) Space bonuses/penalties are not cumulative, meaning that if a space sends you to another space, that space is crossed out and is unaffected. The only exception is the -4 space caused by volcano eruption.

The mode has three successors in Wii Party U:

Retrieved from "https://wiisports.fandom.com/wiki/Board_Game_Island?oldid=145345"
Community content is available under CC-BY-SA unless otherwise noted.