If you're looking for the sport, go to Baseball (sport). 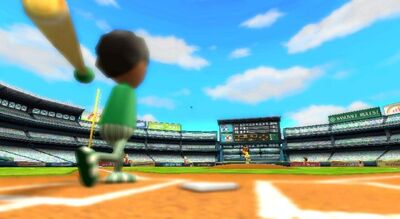 Baseball is one of the 5 training sports featured in Wii Sports and Wii Sports Club.

There are three different training modes for this sport on each of the games:

In Hitting Home Runs, the pitcher throws 10 baseballs, one at a time, toward the player as the player tries to hit as many home runs as possible.

Batting Practice entails the pitcher throwing 30 baseballs at the player, one after the other. The more balls hit, the more points earned. Balls go faster and faster.

Names inside the parentheses "()" are the names in European (PAL) version of the game.

In Homer Hero, the objective is to hit the balls (make home runs) as far as the player can do. The total score is accumulated through the distances from hitting balls. The player can only miss the chance up to 5 times (either from missing the ball or hitting the ball out of bounds), before being declared game over.

In Wall Breaker, the player has to hit the balls to colored "walls". For every successful hit, the "walls" will get smaller and are often leaning to sides.

If the ball hits the pink "wall", the player will get additional 10 seconds. The game will continue until the timer runs out.

Unlike in previous training modes, where the player plays as the batter, Pitch Perfect assigns the player to play as the pitcher, utilizing the Wii U GamePad. The objective is to pitch the ball through 9 moving cubes and then catch the flying objects from the hit cubes. The time limit, controls and total score are shown in the GamePad, while on the TV, it doesn't feature any HUD (Heads Up Display)s.