In Tennis and Baseball, Barry is a top Pro at a Grade of ★10.

In the Tennis Training mode, he appears in Ring Master, where he works as your trainer. Barry will hit the ball towards you, and you have to hit the ball through a set of rings that, after a while, get smaller over time.

In Boxing, he is average at Grade 5.

In Wii Party U, Barry is in Master Difficulty. 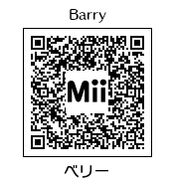 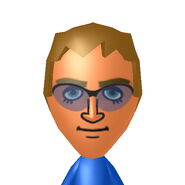 WhoAmI (LilGreenYoshi) against Barry and Mizuho.

Barry in Super Smash Bros. for Wii U. 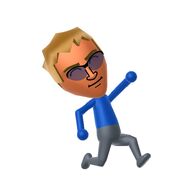 Barry (in yellow) in a Wii Party U Artwork.

Barry with Olga and Na-rae.

Barry with Yuehua and Polly.

Barry with William and Sara.

Barry with Polly and John.

Barry as a swimming referee.

Barry winning in Big Bang Blasters (freeplay) with Jeff, Yuehua and Guest A.

Barry (top left) in the preview video for Do U Know Mii? (EU).