If you're looking for the Mii from the Wii with the same name, go to Barbara (Wii).

If you're looking for the Mii whose name is also used for this Mii in Wii Party U, go to Elena.

Barbara and her sister, Alice are the Champions of Tennis. You face them when you get to Grade ★5. She and her sister earned the title "The Smash Sisters" (or "The Queen Sisters") after defeating the former champions. You get the Stamp "Dethroner of Champions" once you defeat them, and you unlock a frying pan. To use it, you hold down (1) at the Mii selection screen. She is faced randomly after this.

She also competes in Baseball, but only as a teammate.

In Wii Party U, Barbara is in Master Difficulty and is known as Elena. 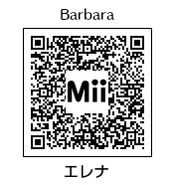 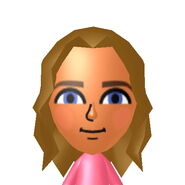 Barbara with her sister as the Tennis Champions.

A description of Barbara and Alice.

Barbara as an opponent in Boxing.

Barbara in the Nintendo Direct of April 2017 in Miitopia, reacting to her kid's stolen face.

Barbara standing next to Jeff in Miitopia.

Barbara's name as Elena in Wii Party U.

Barbara with Daisuke and Araceli.

Barbara as a minigame demonstrator.

Barbara as a swimming referee. 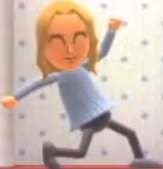