If you're looking for the Mii from the Wii U with the same name, go to Anna (Wii U/3DS).

Not to be confused with Anne.

Anna is a Pro in Tennis, playing with either Ashley or Ai. Her skill level is 1000 making her the first Mii to always be a Tennis Pro.

In Baseball, she is pretty average and her team consists of her, Marco, James, Jake, Mike, Oscar, Chris, Martin, and Fumiko. Anna's skill level is 358 to 563. She plays on the baseball teams of Yoshi, Ren, Lucía, Rachel, Ashley, Naomi, Haru, and Daisuke.

In Swordplay Duel and Speed Slice, Anna is the Vice-Champion, with a skill level of 1481 to 1485. She wears Lanky Black Armor as the Boss of Stage 9 in Swordplay Showdown. She and Asami share a moveset of a Purple Armored enemy with thick legs.

In Basketball, she is terrible, being the 2nd worst player with a skill level of 26 to 30, making her the vice-beginner. She is one of the first three players and plays with Miguel and Takashi.

In Cycling, she is the Champion, coming in 1st place out of 98. Note: Even though she is the Cycling Champion, she seems to do poorly keeping her title, as there are many times where the Mii in 1st is someone other than Anna (Alisha, Fritz, Steph, Tomoko, etc.).

In Wii Party, Anna is in Standard Difficulty.

(Her Japanese name is similar to her English name, but with an aphostrophe between the two N's.)

(Her Korean name is identical to her English name.) 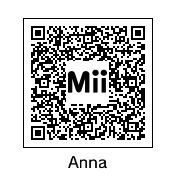 Anna's QR Code, as seen in the portrait. 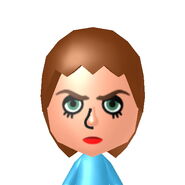 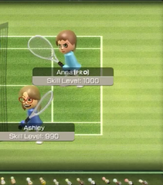 Anna doubling up with Ashley in Wii Sports Tennis. 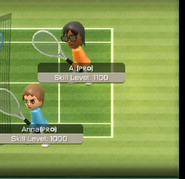 Anna doubling up with Ai in Wii Sports Tennis. 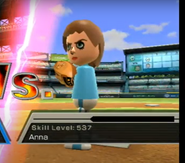 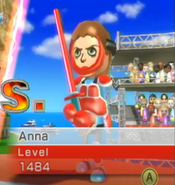 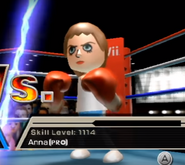 Anna as a pro in Boxing. 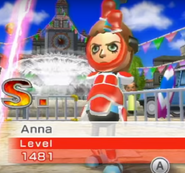 Anna as the boss of Stage 9 in Swordplay Showdown. 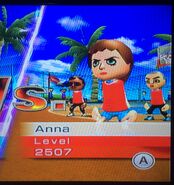 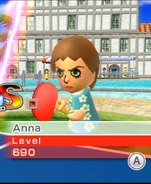 All of the Standard Miis in Wii Party 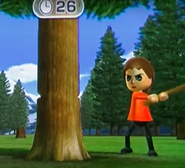 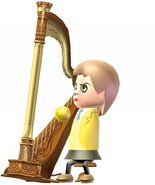