In Tennis, Abby is terrible, being the 5th worst player with a skill level of 35 to 47. She, along with Ren, Chris, Shouta, and Hiroshi, have a lower skill than the starter team of Matt and Miyu. If you lose the first match, she will play against you with either Matt or Ren.

In Baseball, she is also terrible, being the 7th worst player with a skill level of 102 to 313. Her team consists of Kentaro, Matt, Akira, Luca, Emma, Elisa, Jessie, and Silke. She plays on the first nine teams and also the teams of Misaki, Fumiko, Martin, Chris, Oscar, and Mike.

Overall, Abby is one of the worst Miis in Wii Sports.

In Wii Sports Resort, Abby is a Pro in every sport, being the complete opposite of what she was in Wii Sports.

She is a high Pro in Basketball, being the 13th best player at a skill level of 1316 to 1320. She has a team consisting of Theo and Pablo.

In Wii Party, Abby is in Beginner Difficulty.

(The English side for her Korean name is the same as another Mii.) 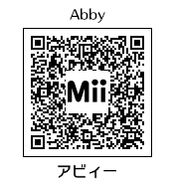 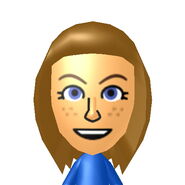 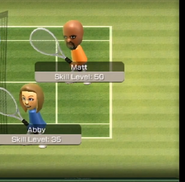 Abby doubling up with Matt in Wii Sports Tennis. 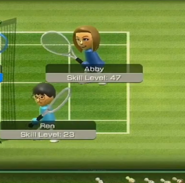 Abby doubling up with Ren in Wii Sports Tennis. 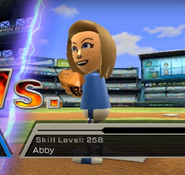 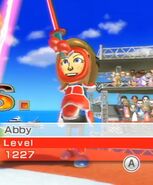 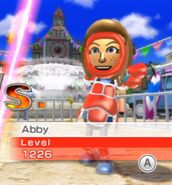 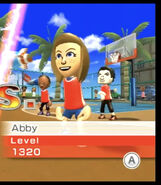 Abby and her teammates Theo and Pablo in Basketball. 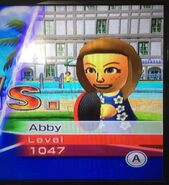 Abby about to play a match in Table Tennis. 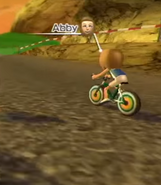 A Wii Party artwork of Abby.

Abby in Timber Topple against Miyu.

Abby holding a soccer ball with many other Miis in Commuter Count. 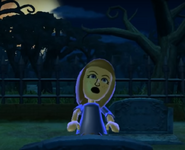 Abby as a Zombie in Zombie Tag.

Abby and Tatsuaki are the worst pair in Friend Connection.

Abby in another artwork for Wii Party.

A Wii Music artwork of Abby.